Athletico is committed to keeping our patients and employees safe related to the Coronavirus (COVID-19). Learn More.

Athletico is proud to announce the winner of the inaugural Athletico Coach of the Year Award.  The 2013 award was presented to David Inserra, Head Coach of the Maine South High School varsity football team. In addition to receiving a plaque, Coach Inserra received four tickets to the Big Ten Football Championship game held on December 7, 2013 at Lucas Oil Stadium in Indianapolis, as well as hotel accommodations for the evening.

The Athletico Coach of the Year Award was created to recognize coaches for all they do to serve their local communities, including sportsmanship, coaching success and classroom involvement.  The award was open to any junior high or high school level coach within the states of Illinois, Wisconsin, or Indiana.  Nominations were open to the public and submitted via an online entry form.  Nominators were required to explain in 250 words or less why their coach should be recognized.  A selection committee within Athletico reviewed the nominations before selecting Coach Inserra as the winner. 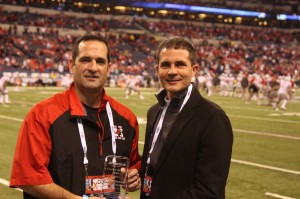 Athletico President Mark Kaufman presents Dave Inserra with the Athletico Coach of the Year Award at the Big Ten Football Championship on December 7 in Indianapolis.

“I was very pleased that Dave was recognized as Athletico’s first Coach of the Year for his work with the many young men who have gone through his program,” said Mark Kaufman, Athletico founder and President. “In addition to his accomplishments on the field and in the classroom, he has been an active community member which embodies the values of Athletico. We are proud to be affiliated with Maine South High School and look forward to working alongside Dave for many years to come.”

In addition to his success both on the field and in the classroom, it was Coach Inserra’s focus on community involvement that lead to his selection. Coach Inserra has built a program that encourages the entire football family at Maine South High School to become involved with community outreach. Coaches, players, and parents have all been provided opportunities to get involved in the local community, including participating in an airplane pull to help raise funds for Special Olympics of Illinois and participating in the Miscericordia Family Fest. These opportunities have helped the program extend their influence beyond the football field.

“I am so honored to be the recipient of Athletico’s Coach of the Year award,” said David Inserra. “Obviously, this reward is a reflection of the people I am surrounded by who do so much of the work that goes unnoticed. Together we have proudly achieved so much in working with our young high school student-athletes. This is a reward we are truly appreciative of and very proud to receive. Thank you to Athletico for understanding what it takes to run a successful program.”