Athletico recently supported the efforts of its Athletic Training Department as they celebrated National Athletic Training Month (NATM) in March. This year’s theme for the month was ‘Every Body Needs an Athletic Trainer’ and Athletico focused their efforts on educating the communities they serve and fundraising for a local organization. 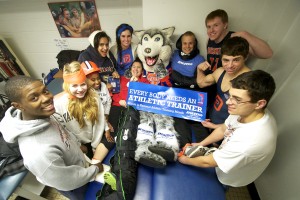 Athletico leveraged their social media outlets to spread the message that ‘Every Body Needs an Athletic Trainer’ through a Facebook photo campaign in which its athletic trainers (ATs) submitted photos of various members of the community (professional athletes, student athletes, staff, etc.) holding a National Athletic Training Month banner.  These photos were posted on Athletico’s Facebook page and voted on by the public.  The winning photo received over 500 “likes” and 88 shares.  The album itself reached over 26,000 unique Facebook users.  Athletico also promoted awareness of the profession through Twitter, sending out more than 50 tweets using the official #NATM2013 hashtag to over 1,700 followers.

“It was great to see how engaged our staff was in our social media campaign.  We had over 80 photos submitted by our ATs,” said Jason Bannack, Director of Athletic Training Services.  “Working with the National Athletic Training Association and using the #NATM2013 hashtag on Twitter gave us a connection to ATs all over the country in sharing our message around the importance of our profession.”

To garner more awareness on a local level and in the community, Athletico Athletic Trainers performed numerous junior high and high school educational and interactive lectures throughout the Chicagoland area, as well as secured proclamations in several cities where Athletico centers are located.

The ATs worked as a team to support the Chicago Hornets Sled Hockey Team by participating in a company-wide jean day fundraiser, selling raffle tickets to win sports tickets and an iPad Mini, and participating in a charity sled hockey game. Athletico also made a corporate donation to the Hornets. 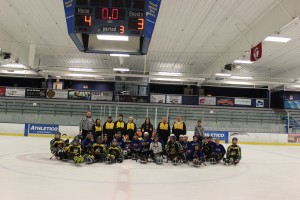 This is the sixth year Athletico has supported the Hornets as part of National Athletic Training Month, raising nearly $36,000 to date. 2013 continued to build on that success with Athletico’s ATs raising $6,000 for the Hornets.  The Hornets organization, part of the Amateur Hockey Association of Illinois, provides kids ages 20 years and younger with a disability the opportunity, at no cost, to learn and enjoy the game of hockey.  The funds raised go towards helping pay for equipment, ice time rental, and travel expenses.

“We have been so fortunate to find a friend in the Chicago Hornets,” said Payten Gerjerts, Manager of Athletic Training Services. “Our staff gets excited about raising funds for the team, and there is always buzz about how we fared in our annual charity sled hockey game where our athletic trainers get to compete against the team.”

Athletico is one of the largest employers of certified athletic trainers in the United States, providing injury prevention, evaluation, and treatment services to over 200 teams and organizations throughout Illinois, Wisconsin, and Indiana including professional sports organizations, performing arts organizations, high schools, colleges and universities, industrial and commercial organizations, rugby clubs, endurance events, golf events, and tournaments and special events.