Athletico Physical Therapy is proud to announce Mike Rolando, head coach of the St. Edward Central Catholic High School football team, as the winner of the second annual Athletico Coach of the Year Award. In addition to receiving a commemorative plaque, Rolando received four tickets to the Big Ten Football Championship game held on Dec. 6, 2014 at Lucas Oil Stadium in Indianapolis. The Athletico Coach of the Year Award recognizes coaches for all they do to serve their local communities, including sportsmanship, coaching success and classroom involvement. 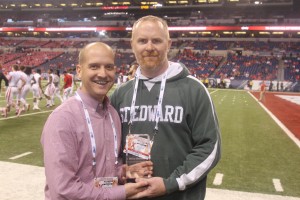 “Though there were many quality nominations for this award, Mike stood out especially as an active member of his community, which embodies the values of Athletico.” Director of Athletic Training Services at Athletico Jason Bannack said. “In addition to his community efforts, he has done great work with all the players that have gone through his program and the students he has guided over ten years. We are proud to be affiliated with St. Edward Central Catholic High School and look forward to working alongside Mike for many more years.”

Nominated by multiple individuals within St. Edward Central Catholic and within the community, Rolando has shown high levels of excellence within his role. The Green Wave finished the 2014 season with a 10-1 record with a second round appearance in the Class 4A playoffs. Finishing his tenth season as the head coach, the turnaround of the football program that Rolando has lead has been remarkable. Winless in his first two years at the helm, The Green Wave have now reached the playoffs four of the past six seasons, and will be poised to continue to break new ground in the fall of 2015.

In addition to his success on the field, Rolando’s focus on community involvement lead to his selection. Rolando has organized volunteer events for his team throughout the school year and summer. These opportunities have helped the program extend their influence beyond the football field.

“I want to thank Athletico and their athletic trainer at St. Edward, Chris Hurckes, for this award.” Rolando said. “The fact that nominations came from people that know our program well, and that the award takes into consideration efforts made off the field in the community and in the classroom, really makes us proud to be recognized. The off field developmental opportunities for these young men, and their academic focus, are the real ‘wins’ for our program. Whether we win 10 games or zero games, we will always have that focus.”

The Coach of the Year Award was open to any junior high or high school level coach within the states of Illinois, Indiana or Wisconsin. Nominations were open to the public and submitted via an online entry form.  Nominators were required to explain why their coach deserved recognition. A selection committee within Athletico reviewed the nominations before selecting Coach Rolando as the winner. Nominations for the 2015 award will be accepted next fall.