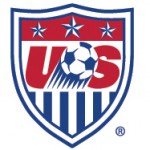 AthletiCo is proud to partner with U.S. Soccer and be designated as the ‘Official Provider of Rehabilitation and Athletic Training Services for the United States Soccer Federation.’

For the past eleven years, AthletiCo has enjoyed a relationship with U.S. Soccer by providing athletic training coverage, both domestically and internationally, for U.S. Soccer’s Youth National Teams.  AthletiCo’s certified athletic trainers have traveled all over the world, including California, Florida, Mexico, Brazil, New Zealand, Canada, and Portugal, to name a few.

In addition, in 2003, AthletiCo became involved with the U.S. Soccer Residency Program by providing two full-time athletic trainers to work with team year round.  The U.S. Soccer Residency Program began in 1999 as a way to provide development opportunities for players, as well as to demonstrate U.S. Soccer’s dedication to the success of their Youth National Teams.  Youth players under the age of 17 are invited into the full-time Residency Program where they live and train together in Bradenton, Florida.  The program fields two full teams who train together during the week and then have the opportunity to compete against club, college, and international teams on the weekends.  Since its inception, more than 300 players have been through the full-time Residency Program, and more than 100 of those players have moved on to Major League Soccer or the professional leagues in Europe.  That number includes six of Coach Bob Bradley’s final 23-man 2010 World Cup squad including Landon Donovan, Jozy Altidore, DaMarcus Beasley, Michael Bradley, Oguchi Onyewu, and Jonathan Spector.