Athletico is committed to keeping our patients and employees safe related to the Coronavirus (COVID-19). Learn More.

Head Athletic Trainer for the Chicago Steel, Steve Bagus, ATC recently traveled with Team USA to the World Junior A Challenge in Yarmouth, Nova Scotia and provided athletic training coverage for the team. Five international teams participated in the tournament, and Team USA took the gold. Each team was a challenge, but as Bagus shared, “Team USA works hard and it shows, as they have won 5 gold medals in the last 6 years of the World Junior A Challenge.” 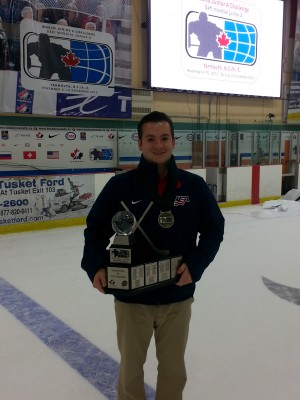 Play after play the gold was always in sight. In the first exhibition game against Canada, Team USA came out on top with a final score of 4 to 3. As the tournament began, USA defeated Russia 8 to 3, Canada East 4 to 2, and Switzerland 7 to 4. Each victory was one step closer to the gold medal game against Russia. There was a boost of confidence as they already defeated Russia, but the opponents came out fighting after their previous defeat. Team USA was up 2 to 1 at the start of the 3rd period.  USA’s Andrew Oglevie, enhanced the lead 3 to 1, followed by C.J. Franklin securing the gold with a final goal making the final score 4 to 1. The gold medal win gave the trip more excitement, as the team celebrated their victory in Nova Scotia. “Visiting Yarmouth was a great experience and the seafood was spectacular,” shared Bagus. Team USA saw the largest lobster fleet in the world and also visited a sport fishing museum.

Athletico is proud that a member of its team had the opportunity to work with Team USA at the World Junior A challenge in Nova Scotia. Congratulations again to Team USA on the gold! Wear it with pride, it is well deserved!