About 2 years ago, I was out for a jog and saw a runner wearing the most peculiar shoes. They looked like a glove with individual toe cut-outs. Fittingly enough, he said they were called the 5 finger running shoes by Vibram. Having never heard of this company or type of shoe before, I thought he was crazy for trying to run on them. Turns out, the shoes were part of a new craze among runners…barefoot running. 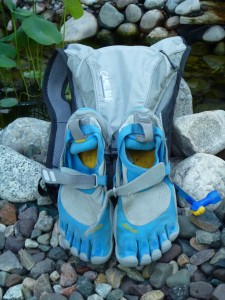 The 5 finger running shoes were named one of Time’s best inventions in 2007. They simulated what it feels like to run in your bare feet. According to Vibram’s website, many individuals reported an increase in sense of balance, improved agility, relief from past running injuries, and an improvement in overall posture. The barefoot running shoes are designed to mimic how our bodies are designed to move naturally. By using shoes with too much artificial support, we are changing our natural gait, or running pattern, which can lead to more injuries.

Although barefoot running shoes have become quite popular over the last few years, the idea of barefoot running goes back centuries. In the history of humans, running has most always been done barefoot, especially in certain parts of the world, such as African countries. It became more noticed in the 1950s when Abebe Bikila from Ethiopia won the Olympic marathon in his bare feet. He said that normal running shoes hurt his feet too much.

What really brought this craze to the forefront of runner’s thoughts was a book titled Born to Run by Christopher McDougall. It focused on minimalist running. Shortly after it was published, the Barefoot Running Society was founded in 2009. This organization has grown tremendously since it first started with new runners jumping on the bandwagon every day.

After I had my daughter, I wanted to get back to running since I had enjoyed it previously. I needed a new pair of shoes and decided to give the free runners a try. I bought the Nike Free 5.0.  At first, they felt very foreign to me and I felt like I could feel every piece of gravel on the road. Now, they are my favorite running shoes. I have tried going back to my old pair of New Balance running shoes, even for just walking, and they feel so heavy with too much support. I used to experience ankle and knee pain for years when running but luckily have not had any since I starting wearing Nike Free. I think I have jumped on the bandwagon and can never go back to regular gym shoes.