A former patient recently approached me with questions about whether Athletico could help him overcome a challenge that had recently developed for him. We talked through some of the options and, with his permission, I wanted to share his story here in hopes it helps others. Physical therapy can help in more ways than just bumps and scrapes.

This father of two and his wife made the decided he would get a vasectomy in order to keep their family at its current size. The vasectomy procedure had gone fine, and they were both happy with their decision. Several months after the procedure, however, my former patient noticed that he was leaking small amounts of urine after going to the bathroom.

This was not enough that it was causing major problems, but just enough that it would sometimes wet his underwear and leave small wet spots on his pants. That, obviously, was creating confidence issues for my former patient and he wondered if he could do anything to correct the problem.

Whenever even the simplest of procedures alter body tissue, for example through vasectomies, one natural response by the body is to develop scar tissue in that immediate area. The difference is that scar tissue does not perform the same functions as the tissue it replaces. This non-functional buildup can then impact other nearby body systems.

In the case of my former patient, the scar tissue that developed after his vasectomy was partially blocking his urethra. This was cause for concern due to the action leaving behind a little extra urine even after he thought he had finished going to the bathroom. 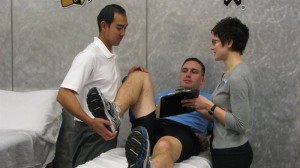 Specific physical therapy can help overcome the challenges created by scar tissue. Regularly massaging the area where scar tissue develops causes that tissue to eventually reduce in size and, as a result, reduce its pressure on other body functions. In the case of my former patient, this could end the current leakage of urine and return his confidence to his pre-vasectomy levels.

Do you have similar concerns or questions? If so, please come speak with one of our Men’s and Women’s Health specialists today!