Running: Bringing People Together (and to Germany!)

Running is a great hobby that it not only good for your health, but also brings people together.

Take the J.P. Morgan Chase Corporate Challenge as an example. This event debuted in Central Park in 1977. The race was inspired by the firm’s sponsorship of the New York City Marathon, and was created with a distance that allowed busy executives to train for the race.

The race expanded to other cities over the years, including Chicago in 1982. At present, the J.P. Morgan Chase Corporate Challenge has grown to include seven cities within the U.S. and six cities in other countries around the world. The event is now seen as a global celebration of corporate teamwork, camaraderie and community.

Athletico Physical Therapy has participated in the Corporate Challenge for several years as a way to get staff together outside of the office for a fun and healthy activity. In 2016, the Athletico women’s team ended up winning the female division of the Chicago race. The team included therapists from a variety of clinics, including Colleen Wood (Lincoln Park South), Dorothy Cohee (North Loop), Britta Gauthier (Union League Club) and Elizabeth McGuire (Niles/Northwest Chicago). As winners of the female division, the team was given the opportunity to travel to Frankfurt, Germany in mid-June 2017 for the Corporate Challenge Championship. 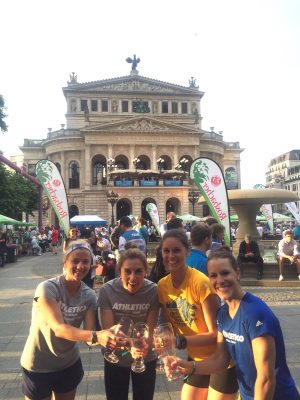 Athletico’s team arrived in Germany on Sunday, June 11th. On Monday the group enjoyed a scenic, historical, four-hour walking tour around Frankfurt. In the evening everyone gathered for a welcome reception, where runners from around the globe celebrated being together the night before the race.

After doing some more sight-seeing around Frankfurt on race day, Athletico’s team headed to the start line with all of the other runners. The start line for the Championship race also happened to be the finish line for the local Frankfurt Chase Corporate Challenge. The Championship race started about 30 minutes prior to the 60,000+ runners who were getting ready to run their yearly Corporate Challenge. As Athletico’s team came to the finish, thousands of runners were there cheering as they were nearing the start of their race.

Once the times were tallied, Athletico’s women’s team came in fourth place among the 13 teams they ran against from around the globe. After the race, everyone celebrated with an after party courtesy of Chase. The party included a meal, German beer and dancing. Overall, the race was a wonderful experience that brought together people from many different places who had one thing in common – a passion for running. The race also allowed all participants to get to know their coworkers better. Athletico’s team had a great time in Germany, and each runner is looking forward to her next race!

If you’re interested in learning more about training for or recovering from marathons, Athletico has an Endurance Rehabilitation program. Click the button below to learn more.