Sitting vs. Standing: The Benefits of Standing

As soon as I identify myself as an “ergonomist,” I’m confronted with the same questions regarding ergonomics. No, this question isn’t related to the repetitive nature of assembly line work or the awkward postures assumed by building engineers, but it’s in reference to the continuing debate: Is Standing really better than sitting?

This question is not as simple as it first appears. My “knee-jerk” reaction is always “yes, standing must be better than sitting.”  Certainly the benefits of standing (e.g. increased caloric expenditure, increased circulation to distal appendages, etc.) are convincing, however are we gathering the entire story? Are there other factors at play? First, let’s recap the known benefits of standing during office work:

1) The low-back (L4/L5) compressive forces are lower when standing than sitting.

As seen in the diagram, the L4/L5 compressive forces are approximately 40% greater when seated upright versus standing upright. The compressive forces increase even more significantly when assuming the all-too-common “leaning forward posture” during computer work.

However, there is also evidence that suggests that a supportive backrest with an adjustable lumbar support can significantly decrease the compressive forces at the L4/L5 vertebrae.

So, it appears that a low amount of compressive force at the L4/L5 vertebrae can be obtained both in the standing and seated position. Let’s call this a tie.

2) There’s an increased amount of caloric expenditure during standing than sitting.

Utilizing a population of young adults (~20 years of age ± 1.9 years), the University of Minnesota found that when assuming a standing posture, an additional ~114 kcal are expended each day. This translates to approximately 20,461 kcal, or 5.85 pounds, of additional caloric expenditure over a one-year period.

You might be thinking; wow, 5.85 pounds! How can I afford not to stand during the workday? However, consider standing for 8 hours each day for 5 days / week over 52 weeks / year. That’s quite a bit of standing.

Again, this is a benefit that is generally accepted. Blunt chair edges, increased seat pan tilt, incorrect chair height, etc. are all factors that can contribute to a reduced amount of circulation to the lower extremities. You may be familiar with the feeling of “tightened shoes” later in the workday. This feeling of the shoes tightening is edema in the feet due to a decrease in circulation. 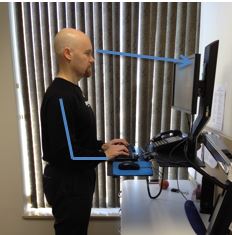 Solutions to this problem may include standing, but you may also choose to utilize an angled footrest to open-up the knee angle or to adjust the chair to increase circulation.

There are certainly other factors at play, and, this debate could (and might) go on forever. Every ergonomist will have their own “opinions” and research to support their beliefs, however I’m authoring this article so I’ll give you my opinion:

Standing is great. The benefits are straightforward and certainly standing will be a better solution to long-duration work than sitting. However, standing is still a static posture. There lacks dynamic movement when standing or sitting which is problematic for a population of “bipeds” who are designed to move throughout the day. So, what is the reality?

Standing positions should be assumed whenever possible while maintaining the freedom to sit whenever fatigue or discomfort occurs. In fact, an article published in the Journal of Ergonomics reports the following:

The lowest percentage of low-back pain amongst the studies population was reported when standing with the possibility of sitting down at will. Only 17.4 percent of the sample population reported discomfort in this setup. Even more convincing is the response by those without the possibility of sitting (e.g. standing all day). 30.4 percent of the sample that stand in a “fixed or relatively fixed position” reported low back pain.

If you would like to learn more about ergonomics, please use the button below to schedule a complimentary injury screen at an Athletico near you.