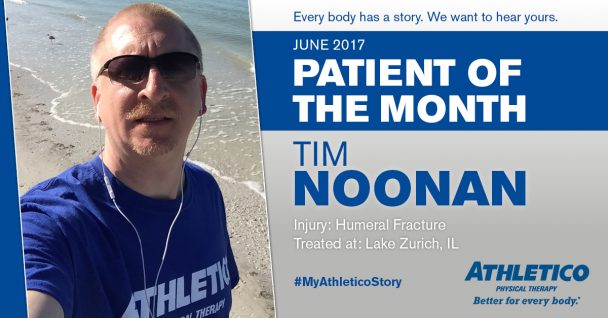 I’ll never forget the moment I hit rock bottom. It was a Monday evening in early July of 2016. My therapy from a greater humeral fracture two months earlier was hitting a wall. I was making little to no progress in regaining mobility. My body was in constant pain, unable to focus on normal day to day activities, and my insurance company was growing impatient with my progress, hesitant to cover future sessions. As I struggled to complete a simple stretching exercise at home, I couldn’t take it anymore. I broke down and just sat on the floor of my bedroom crying. I kept asking myself “Is this my future?” I had one, maybe two therapy sessions left before I would have to try and figure things out on my own barring some type of miracle. Even though I was to start working with a new physical therapist (PT) the next day, I was less than optimistic that anything would change. I felt scared and alone. Even though I had the support of family and friends, it was still my arm, my pain, my struggle and my future – and the future felt about as bleak and hopeless as one could imagine.

The following afternoon I arrived for my session with the same feelings as the night before. I figured I’d meet this new PT, struggle though some exercises, have my arm stretched out, I’d leave in pain and that would be it. My expectations were low, my morale lower. After a short introduction with my new PT Mackenzie, I started my normal routine of some light hand exercises while applying heat to my shoulder. She sent me to use the pulley machine. After about 30 seconds of futility, I heard a voice tell me to stop what I was doing. Mackenzie pulled up a seat next to me and we spent the next few minutes discussing what I could or couldn’t do, what things I’d done in the past, and why I was in so much pain all the time. At the end of the exchange, she looked me dead in the eye and said “Everything is going to be different from this point forward, we’re going to get this right.” The rest of our session was spent getting a better understanding of the why’s: Why I couldn’t do these things? Why was I in so much pain? And why we were going to be able to continue my sessions with coverage form my insurer. Before we even met she had a teleconference set up with them for the following day and took detailed notes to help justify the need for continued therapy. I left that session feeling mentally and physically better than I had since before my accident. Still feeling defeated and worn down, a small part of me thought maybe this was that miracle I was hoping for, and needed.

Once Mackenzie’s plan was put into place things started improving fast. My pain lessened, tasks were becoming easier and I started to feel more like myself. After two and a half months of sleeping in an almost upright position I was finally able to lay flat on my back at night. One moment that I will never forget is when I was finally able raise my arm using the pulleys. Everyone in the room stopped what they were doing to watch and offer congratulations and encouragement. This was just one of many different occasions where the caring spirit of the staff at the Lake Zurich clinic was on display. Everyone was pulling for you to succeed whether they worked with you or not.

Mackenzie knew that only so much could be accomplished in our sessions, and a lot more work was needed on my own. She helped me set up an at home routine. A lot of stretching exercises using the kitchen table or a desk in the beginning. An elastic band, a set of pulleys, foam roll, weights and a fitness ball would follow, and my spare bedroom started to resemble a home gym. Five minutes of my arm just dangling out of a sling had evolved into a 90 minute nightly routine still in place today.

With each session, we made more progress, but we never rested on the success. She always set the bar higher for the following session. It wasn’t easy and never without pain. A few times I had to be reminded there were some younger ears in the room after blurting out an expletive or two from the physical pain of reaching new ranges of motion that my body was not accustomed to. But it was all in good fun.

As the summer gave way to fall, the work continued. Our sessions went down to twice a week but the work never stopped. Every day was a new challenge. We had the added pressure of a few follow up appointments with my orthopedist where the progress we made would be scrutinized. Mackenzie made sure I was more than prepared, not only physically, but with very well detailed progress notes for the doctor to review. She even took time out of her day to accompany me to one appointment to get my Doctor’s perspective on what was the best course of action.

In a perfect world focusing on therapy would be 100 percent distraction free, and the troubles of the outside world would be non-existent. But the reality is, there’s always something. Over the course of my therapy sessions there was a lot of outside distractions. I had to deal with coverage issues and a lengthy appeal for additional coverage from my insurance providers, a sick relative and the death of a friend. There were lots of times where it would have been easier to just give up and take a night off, or even try and coast through a session when I wasn’t feeling up for it. One of the best attributes of my PT was her ability to listen, and always offer a positive spin the best she could. She was great at helping me forget about the outside world for those two hours to focus on fixing myself.

About six weeks ago at the start of our session, she said something that I never thought I would hear, a graduation date! I’ve been in PT for the last 10 months and imagined at least another 10 more! It just seemed so far away, and there was always more work and new exercises to start. I saw so many other patients come and go, many just as encouraging as the staff and I always made it a point to return the gesture whenever possible. I never thought it would be my turn to say goodbye.

So here I am today, less than 24 hours from my final session at Athletico in Lake Zurich. Tomorrow is going to be a bittersweet and emotional day to say the least. I was pushed physically unlike anything I’ve ever experienced and still have a lot of work to do on my own, but I am much more confident in myself now thanks to the outstanding support I received here. It’s only fair that I also acknowledge the other people from the Lake Zurich clinic who helped me along the way too. Lindsey and Rachel were there from the very beginning, when I was still in a sling and too scared to even lay on a training table, but they guided me with ease. Melissa was tireless in her efforts in helping me with the insurance side of things. And not to be forgotten are the aides including Andrew, Morgan, Stephanie, David and anyone else I may have overlooked. I’ve never been to another physical therapy facility in my life (and hope I never see one again) but I feel confident in saying the bar is set unbelievably high at this location, and would recommend it to anyone I could.

I had no idea how much life would change over the past year after falling down the stairs and suffering a life changing injury. I could have wound up with a therapist who just went through the motions, wrote some progress notes and sent me on my way. I was extremely fortunate to get to work with people who went way above and beyond. When I was at my worst, I needed the best and I got something even better – for that there is no way to say thank you enough!