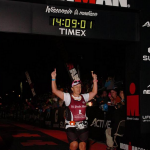 I have worked with David in South Elgin multiple times for various injuries since I starting running and competing in triathlons. My works out resulted in imbalances and not enough strength training. Last year at the Chicago marathon I had a massive hip injury (gluteus medius) flare up 2 weeks before on my last 10 miler. It was so painful, I was only able to complete half the race. After two physician consultations, they advised against competing in the marathon. Well I did. The injury and pain flared at mile 1.8 … YES 1.8!!! That made for a very long and painful run. I ran for half the race, considered dropping out but continues with the help from a great friend and inspiration from the cause I was running for, St. Jude. I did finish and could hardly walk to my car.

My left hip, glute, and quad were bruised and swollen, earning me an MRI the very next day. One picture sent to my doctor, I was told I had massive hematoma (blood). After being diagnosed, I did not run for 3-4 months and started seeing David at Athletico’s South Elgin location. David worked with me for about 3 months. Work outs included strength training and overcoming the imbalances I faced initially. This year I have PR’d EVER SINGLE RACE I HAVE DONE!!! 5K’s, 10 milers, 1/2 marathons, sprint triathlons and my half Ironman. David was a BIG part of my success this year.

That success has me confident enough that I signed up for Ironman Wisconsin on September 13, 2015! I completed my very first Ironman in 14 hrs 9 min.  I even managed to PR the marathon in my Ironman by 23 minutes!